The primary purpose of ARRL Field Day is to simulate operating under emergency conditions. Emergency operation typically involves using some kind of emergency power source, either because the power grid is down or because the operating location is not near an electrical outlet. Field Day rules reflect this. Entry classes A, B, C, and E require that all contacts be made with transmitters and receivers operating independent of commercial power mains. Only class D, home stations, and class F, Emergency Operations Center, allow commercial power.

The most-common power sources used on Field Day are generators, batteries, and solar systems.  We will cover each of those as well as discuss radio-frequency interference issues associated with them.

Many years ago, the ham club I belonged to had an enormous 5 kW military surplus generator mounted on a trailer.  To call it “rugged” was a gross understatement.  A mechanical governor controlled the motor’s rotation speed to ensure 60 Hz power.

Many modern generators produce high-voltage, multiphase AC that is rectified to DC, which is then converted to very clean and consistent 60 Hz AC power by a solid-state inverter controlled by a microprocessor. These “inverter generators” can run at idle when the load is small, increasing speed to meet additional demand. That improves efficiency and reduces emissions. The Honda EU2000i 2000W generator (or their newer EU2200i 2200W variation) is one of the most popular such models. It is small, lightweight, acoustically quiet (for a generator), and currently priced at about 50¢ per watt.

Note that those power numbers are surge ratings – what the generator can put out briefly to accommodate the turn-on surge current of an electric motor.  For example, the Honda EU2000i is rated for only 1600 Watts continuous.  Be sure that the power drawn by all devices connected to the generator is de-rated well below the continuous rating (25 to 30 percent).

Our old military-surplus generator was so loud that we had to put it far from the operating positions and connect it with a long extension cord.  Even so, part of the Field Day experience was putting up with the constant drone of the generator.  The Honda units are much quieter, but it still is a good idea to place them behind a vehicle or some other sound barrier.

When positioning the generator, there are some safety issues to consider.  All wires on the Field Day site, including power cords, must be routed so as not to constitute a tripping hazard.  Never operate a generator indoors or in an enclosed area — all gasoline-powered engines emit carbon monoxide, a lethal, odorless gas.  Be aware of potential electrical shock hazards.  If rain is a possibility, place the generator under a pop-up tarp or other protection to keep it dry.  The muffler can get hot enough to ignite some materials.  Keep any flammable material well away from the exhaust and do not store gasoline or any other flammable liquid near the generator.

Never re-fuel the generator while it is running.  I know, you may have gotten away with that in the past but it is not safe.  Stop the generator and let it cool down before re-fueling.  Make sure that any spilled fuel has been wiped up and cleaned before starting the engine.  Of course, never smoke when around gasoline.  Keep a small fire extinguisher (rated class B, flammable liquids) nearby.

A ground rod is not necessary (i.e. optional) for a portable generator that has three-wire grounded outlets that are bonded to the frame of the generator.  All extension cords must have intact, waterproof insulation, three prongs and three wires, and must be sized according to loads and cable runs.  You can use #14 or #16 AWG three-wire extension cords for low-wattage runs up to 100 feet.  For longer runs or for heavier loads, #12 heavy-duty cords are a better choice.

When it is time to power down the generator for re-fueling, let all operators know in advance so they can properly shut down radios and computers in an orderly manner.  Keep loads disconnected at the generator until it has been restarted and has had time to stabilize.

If a gasoline-powered generator is not stored properly, it may not start when needed for the next Field Day.  Running it for 30 minutes or so every few months is a good way to keep it ready.  Before putting it in storage, run it until the gas tank and carburetor are dry. Another option is to close the fuel shut-off valve and run it until the carburetor is dry.  If you store the generator with fuel in the tank, use a fuel stabilizer additive to prevent varnish build-up and absorb condensation.  Similarly, gasoline stored in a container should be regularly rotated out by using it in a vehicle and refilling the container, or an additive for storing gasoline should be used.

There have been many advances in battery technology in recent years.  Traditional wet-cell lead-acid batteries are giving way to Absorbed Glass Mat (AGM) lead-acid batteries and various types of lithium chemistries.  It is important to use the proper charger for the type of battery in use.

A typical car battery is not really intended to provide moderate amounts of current for long periods of time.  Rather, it is optimized for providing a large amount of current for a short time to start the engine.  For that reason, car batteries are typically rated for “cold-cranking amps” (CCA) and not for amp-hours (Ah).  The capacity is typically between about 40 Ah for a small car up to perhaps 75 Ah for a truck.  A 50 Ah, 12V battery, for example, stores about 12 x 50 = 600 Watt-hours, which should be enough to power a 100 Watt transmitter overnight, but would likely require recharging once or twice during the Field Day period.  So-called “deep cycle” batteries, commonly used for such applications as trolling motors on fishing boats, are better-suited for continuous discharge and generally come with an amp-hour rating.

Most amateur transceivers are designed to operate at a nominal 13.8V from a battery being charged by a vehicle’s engine.  However, when not being charged, the voltage of a lead-acid battery may be as low as 12.2V.  As the battery’s state of charge goes down, the voltage is reduced further, especially under load.  Several manufacturers make “battery boosters” that provide a regulated 13.8V as the battery voltage varies.  In the past, I have used the N8XJK model, currently offered by West Mountain Radio.

The Field Day rules specify that stations in Class A Battery and Class B battery classes must charge the batteries from something other than power mains or a motor-driven generator (e.g. in a car).  The power is limited to 5W maximum for those classes, so a car battery that has been charged from solar power (for example) should easily last the entire Field Day period.

It is generally not very practical to operate a Field Day station directly from solar panels for the obvious reason that the sun is not out all the time.  A solar generator system includes solar panels and a unit that includes a large battery to store energy, a battery charger, and an inverter to convert the DC battery voltage to 120 VAC, 60 Hz.

I recently bought a Lion Energy Safari ME solar generator system on sale at Costco, pictured above.  Lion Energy is a fast-growing provider of solar systems based in American Fork UT.  The base Safari unit consists of three 100-Watt foldable solar panels and a battery/charger/inverter unit.  The inverter is rated at 2000W continuous, 4000W surge.  The internal Lithium Iron Phosphate battery stores approximately 1 kW-hr of energy.  They offer an optional expansion pack that adds three more solar panels and another 2 kW-hr of battery storage.  You can get both units for a total of about $4000.

A system like this has some advantages over a generator.  You don’t have to deal with all the safety and other issues associated with using gasoline.  For example, you don’t have to shut down the transmitters when re-fueling.  There is no hot muffler and you don’t need a spark arrester to prevent starting a forest fire.  Unlike non-inverter type generators, the output voltage and 60 Hz frequency are very accurate and stable.  It easily puts out a full 2000W with a surge rating double that.  It is acoustically quiet (although not totally silent – there is a fairly loud cooling fan).

The base unit should work fine for a single 100W station.  The three 100-Watt panels should be plenty to cover the transmitter during the day even under overcast conditions and the 1 kW-hr battery can easily power the rig through the night until the sun comes up the next morning.  With the expansion pack, the system should power three or more 100-Watt stations without a problem.

The only downsides I can see are the cost and a possible RF interference issue.  Which brings us to the final topic.

Old-fashioned, non-inverter type generators have no RF interference issues except possibly ignition noise, which can be tackled in the same way as in an automobile.  But an inverter is a type of switching power supply, which can generate harmonics of the switching frequency.  This applies both to inverter type gasoline generators and to solar generators.

Jim Brown K9YC is a professional engineer who has done a lot of research on RFI that he has published on his web site.  Much RFI is caused by common-mode noise on cables, such as power cords, coaxial antenna cables, etc.  One way to reduce this noise is to use ferrite chokes.  These can be toroids, clamps, or beads placed over the offending wires.  Type 31 is the magic ferrite mix that has good attenuation in the HF range.  Jim has done a ton of research on this and provides suggested solutions in his papers.

I set up the Lion solar generator at my house, placing the solar panels about 15 feet from my antenna (a ground-mounted 6-BTV trap vertical) and the battery/inverter about 30 feet away.  When charging from the solar panels, I could hear (clean and stable) spurious emissions (spurs) spaced every 20.0 kHz from the 40 meter to the 6 meter band.  I wound 12 turns of the cable through a 4-inch OD, 3-inch ID, type 31 ferrite toroid, placed close to the input to the charger.  (See photo.)  That didn’t seem to do much on 40 and 6 meters, but did a good job of reducing or eliminating the interference on all the other bands.

For testing the power cable, I powered a 700 Watt space heater through a 12-foot extension cord (a.k.a. the antenna).  That caused rough-sounding spurs every 40 kHz or so on the 20 through 6 meter bands.   I wound 12 turns of the power cord through an identical toroid, again placed close to the inverter.  That killed the interference on 20 meters but only reduced it 5 or 10 dB on 15, 10 and 6 meters.  The reason turned out to be that much of the interference was apparently coming directly from the chassis — it was still there with the power cord (and all other cables) unplugged and went away when the 120 VAC output was switched off.  To be fair, the levels were a maximum of less than -100 dBm (S4 or less) and would likely be mostly covered up by all the strong stations on the bands on Field Day.  It would help to move the solar generator farther from the antenna(s).

You can get a set of two of these toroids, specifically marketed for reducing generator noise, from DX Engineering’s web site for $79.  I used these large-size toroids because they are large enough to feed a three-prong power plug through the hole while still leaving room for the windings.  For the skinny cable to the solar panels the smaller 2.4 inch OD toroids would work fine.  DX Engineering sells a set of 4 of them for $50.  It is good to have a set of these around for general RFI work anyway.  Sometimes you have to put two or more toroids in series in cases of severe interference. 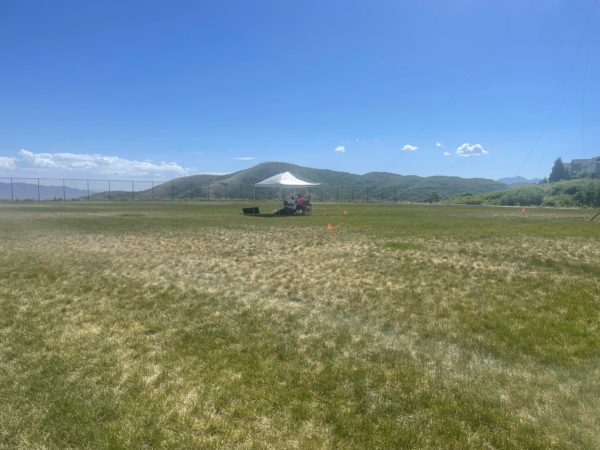